How to improve ad viewability 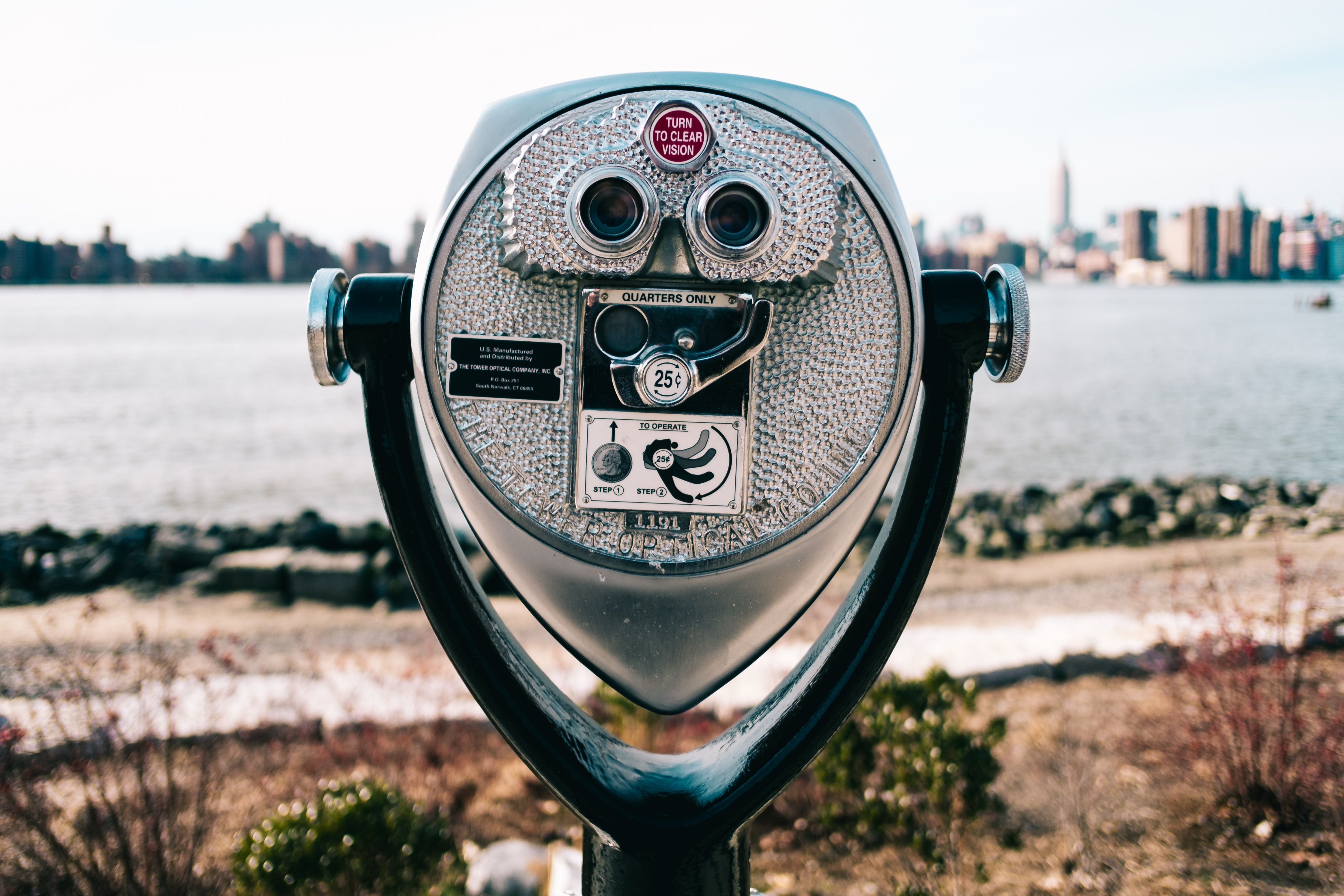 There’s not much point in paying for an advert if nobody sees it. But if you look at the average ad viewability rates on mobile, that’s exactly what is happening. In 2019, ad viewability rates stood at 58% for mobile display ads. This means 42% of advertisers’ impressions never saw the content of the advert.
And when we say no-one, we don’t mean that the campaign creative sunk, we mean that the ad was never even displayed. Ads can be requested at the moment of page click, alongside which ad networks register an impression, yet the actual content is never seen in the viewport by the end-user.

This has led advertisers to push back on the industry over ad viewability standards. They want to know why they should pay for meaningless impressions. And they have a point.

If an ad is served but there’s no-one around to see it, does it still count as an impression?  Marfeel and our partners at the IAB would say no. That’s why we start any conversation about ad viewability with a standard definition of a ‘viewable’ ad.
As a member of the IAB, Marfeel has been working on making ads more viewable as well as valuable, and we have techniques to share with publishers.

So, what makes an ad 'viewable'?

The industry standard for viewability backed by the Media Ratings Council (MRC) and Interactive Advertising Bureau (IAB) is that at least 50% of the ad pixels should in view for at least one second (for video, 50 percent of a player must be in view for at least two seconds) in order to register an impression.

Before this measurement standard publishers had to integrate multiple providers to provide advertisers with accurate viewability data. This can have the unintended consequence of slowing down page speeds and reducing ad viewability and CPMs.

With an established viewability measure, advertisers can use a single tool to measure if the ad was viewed, rather than just the iframe being rendered. Active View is one such technology integrated into all of Google's advertising products and measures, in real-time on an impression-by-impression basis, whether an ad was viewable, using the IAB standards. The IAB also offers an open-source viewability library for measuring video viewability. 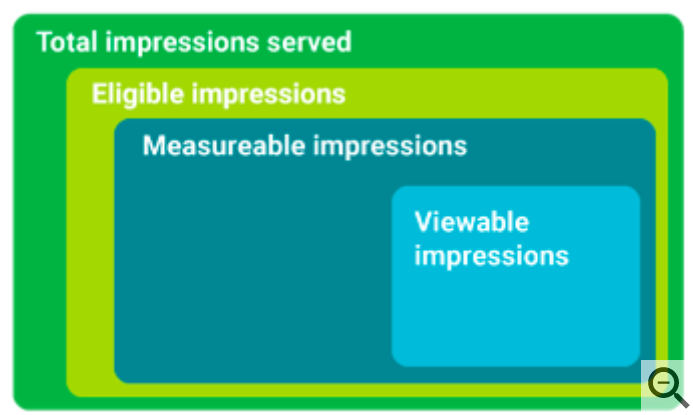 The causes of bad ad viewability

Now we know how to identify non-viewable ads, it becomes easier to spot the causes of low ad viewability. If the code in Active View doesn’t register, we can look at the non-viewable ads and determine why they were not seen.

One of the primary causes of low ad viewability is that pages can load before the ads. The user sees a white space, and scrolls past it. As the ad has been loaded, it registers an impression, but the user will have never seen it. The ad loads above the viewport as the user wonders why there was an empty white space at the start of the article. 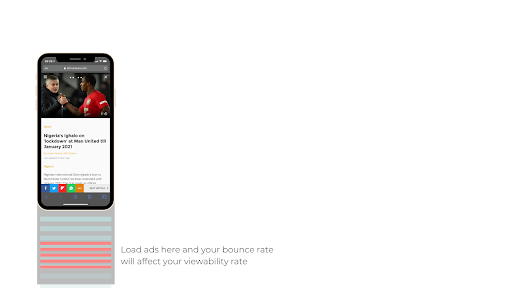 Readers make snap judgments on mobile pages. If your first ad placement is placed ‘below the fold’ any readers that bounce before scrolling are not going to see the ad. In the time it takes for readers to check the headline and decide if they are going to read further the ad loads, registering an impression. Any readers that don’t scroll down (effectively, your bounce rate) won’t see the ad. Every one of these readers is eroding this ad’s viewability score.

Without lazy-loading on your ad impressions, your below the fold ad impressions will load before users see them and they may never scroll down enough to see them.

When users move inactive pages to the background, ads can still load. Around 10% of non-viewable ads are ‘auto-reloaded’ on pages within inactive tabs. Although Google AdManager prevents inactive tab ads from rendering, other ad servers still allow this, and it will hurt your overall viewability.

The image below shows how ads can load in non-viewable scenarios. These examples account for around 95% of all non-viewable ads. 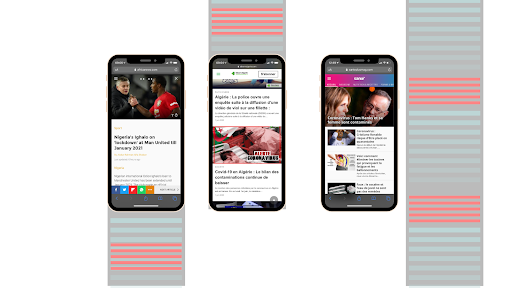 Below the fold, slow ads, and inactive tabs account for nearly every non-viewable ad.

If you don’t have a system to prioritize loading ads in the viewport, ads loading where users can’t see them will drag your viewability down.

With a standardized measurement system in place and the causes of low viewability identified, publishers can apply techniques to increase viewability.

When used properly, lazy-loading can increase the overall ad viewability percentage dramatically. Lazy-loading will prioritize the content in the user’s viewport, rather than loading the entire page. It means bandwidth and time are not wasted loading content that they might not scroll to. Images and ads, some of the heaviest loads, can wait until the user requests them.

In cases where a user didn’t scroll down, for example, the Below-the-fold ad slots never loaded, fewer ad requests are made and there are fewer non-viewable ads. It also makes pages lighter and faster.

Spotting repeat offenders can help publishers find more viewable placements. As the ads have to be viewable for a full second, publishers have to consider scroll speed. 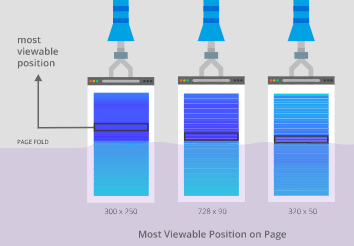 You can see in this diagram that all the ads are viewable as they are above the fold, but you can lose value by placing it too high. Header and title content can be flicked past in a moment, failing to register a viewable impression.

Place ads in content-heavy areas of the site. Avoid spots with light or no unique content. And remember, an ad is always scrollable, so don’t take up viewport space with too many ads or your readers will skip past them all.

Speed up your ads

As we know every click is going to see ads in the first viewport, at least, speed matters most in first and second ad spaces. It’s possible to get a major bump in viewability by making these impressions load as fast as possible, first loading the page code, the second ad on the viewport, and then all non-vital code to deliver this impression.

In a project dedicated to improving ad viewability through faster first impressions, the team at Marfeel developed a unique Fast Ads delivery system. All monetization code is separated from the page content and server-side header-bidding is started in parallel using a service worker. The first ad is instantly requested and just the essential page elements are lazy-loaded before other content is requested.
This keeps ads fast and loading inline with page content, creating a viewable impression that has a better chance of being viewed for a second.

Finally, in addition to lazy loading, which delays the request, lazy rendering will complete every stage aside from the final ad impression until the final moment it is requested.

After measuring the average user scroll speed, data has shown that publishers should lazy render ads one viewport in advance . By the time they scroll an additional viewport, the ad will be viewable and fully rendered.

With this techniques, publishers can get as close to full viewability as possible. This opens up new inventory options such as 100% viewable impressions which command far higher CPMs from advertisers.

In addition to these viewability best practices, Marfeel has a complete guide to finding the balance between ads and mobile UX.